Some will read the term “Augmented Reality” and will consider it something that only geeks or nerds only understand. But no, the augmented reality already coexists with us in our smartphones, although we did not know it.

Let’s do an exercise: we grab our mobile device and open any of these social networks, Instagram, Snapchat, Facebook or Facebook Messenger. Now, we open the option to take a picture and we allow you to decorate the shot with some special effect like hats, sunglasses, lights, floating hearts, ears and nose of dog or cat, etc. We take the picture and we publish it. Are you familiar?

Very good, because all those effects and elements that enrich our photo is augmented reality, just like the technology used by the now famous Pokémon Go game. It is the principle of adding elements that do not exist in our reality, through the reading that makes a lens (in this case that of our mobile devices) without us losing the notion of where we are (as it happens with virtual reality) )

At this point, let’s get on the stage where we go to a kiosk and buy a magazine or newspaper (habit almost abolished) and when we start reading, as is understandable, we show more interest in certain articles or content, wishing to have more information or data from those who provide us there. Well, here the augmented reality is the great solution because it prevents the medium from saturating your product with information and to us as a public, it gives us the possibility to delve deeper into the issues that we have in consideration.

We simply have to grab our smartphone and through a specific app, focus that content on the newspaper or magazine in question, to discover other related resources such as videos, infographics, graphics, photos or simply more information.

Of course, for the medium or content creator this is a somewhat complex process, since it deserves that designers and programmers are constantly working to obtain these results. But beware, these are not just assumptions, and already in the world there are cases where it has begun to be put into practice. Without going too far, The New York Times and The Washington Post have already included it as an alternative within the framework of their information offer.

The Swedish IKEA for some time, endowing its catalog with the possibility, through its mobile app, to allow customers to anticipate in their homes or specific spaces, see how a particular piece of furniture or accessory would look before going to the store to acquire it

But what about TV? How do we apply this technology to objects or images that are in constant movement? Well, the answer is the people of The Weather Channel, who have incorporated the resource, not only to make more interactive broadcasts, but to explain in the most spectacular graphic way possible, the effects of certain meteorological phenomena.

We must note that in the case of this medium, the experience is given through the principle of Mixed Reality, which is nothing more than the conjunction of augmented reality and virtual reality without us losing equally, notion of the place where we are . It is a concept developed mainly by Microsoft but that is still evolving.

There are those who affirm that TV, as well as the newspapers, magazines and books, live their decline in the face of the revolution of new technologies, digital formats, the culture of audiovisual consumption on demand and new narratives.

I think particularly that all this will continue to live as it has been doing, after all, postmodernity has shown us that we are increasingly segmented as an audience and that, if we want to inform and transmit knowledge, we must do it by more and more ways and channels, with which, analogue media will evolve to incorporate some elements of the new technologies, and new media will be adapted to younger audiences and not so young but more daring :).

A recent tweet from the Press Association of Madrid showed that 81% of Spaniards, today, opt for TV as the main means of information. 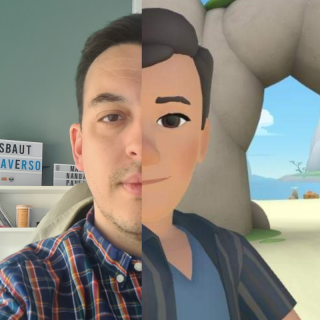